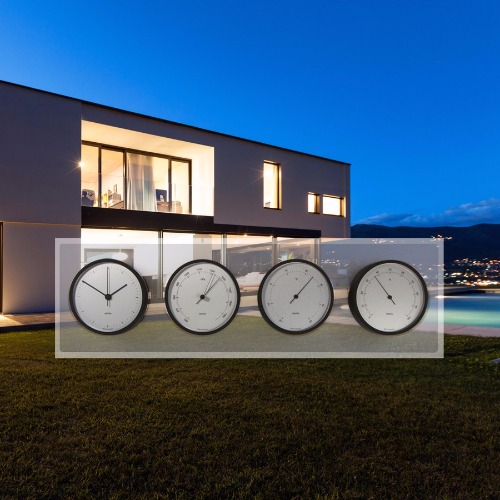 .
Weather station with clock, barometer, thermometer and hygrometer on a wall panel.

Wall panel dimensions are 525 x 150mm.
The wall panel is a nature-anodized aluminium sheet with a thickness of 4mm.

Made in Denmark by Delite.

His interest in design and product development must be hereditary! 200 years ago an ancestor in the town of Ringe carved footshaped clogs, and not only that, he built violins, too! In 1985, having moved to The Island of Langeland and for some years been working as a toolmaker, Mogens Clausen carried into effect a production of weather stations, table clocks and world clocks in a workshop behind his private residence.

To begin with his clocks were sold to wholesalers and shops. The market was soon extended to include firms ordering products stamped with their company emblems. The production went on until 2005, when the firm was sold to the Delite ApS.
In 1990 Clausen Ure [Clocks] was honoured with the Formland Prize for a table clock made in solid aluminium. A lifelong interest in Irish music - also deriving from his genes - has resulted in Mogens Clausen today is making traverse flutes, traversos, based on working drawings from the 19th century.
The compass production however, which started in 2013, has forced him not to spend all his time on traversos!